Home Gagdet New Design in Feature in Facebook for iPhone 4.0

Dapur Kumis    10/13/2011    Gagdet
Good morning all, apparently rather a long time to repeat the iPhone such a success last time he was first launched. Now often in the Update for iPhone to version 4.0 which can be used on Facebook. These are New Design in Feature in Facebook for iPhone 4.0.

The new features can also be found on Facebook’s mobile sites m.facebook.com and touch.facebook.com, which can both be accessed from Android phones that have yet to receive native Facebook app update with the lastest changes. 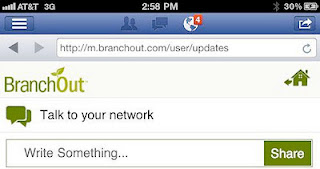 One of the worst things about the old Facebook for iPhone app was the grid screen navigation. If users wanted to switch between in-house Facebook apps such as the news feed, Photos, Messages, and notifications, they had to exit their currently used app to the grid screen, then dive back into another app.

Facebook for iPhone 4.0 reduces the friction of app switching through a slide-out navigation menu that is accessible from any screen and houses all in-house and third-party app bookmarks. Users can open the navigation menu, but then easily close it to resume their previous activity.

Notification
This is just an example, you can fill it later with your own note.
Done